Despite the warmer than average temperatures and much lower than normal rainfall for the merry month of May, our rooftop garden got off to a strong start and appears to be thriving splendidly.  Having a smart self watering system installed was a definite bonus.  Each growing pod has its own water setting which regulates watering times and amounts, based on the needs of what is being grown there.  During wet rainy periods the system can be deactivated until needed again.

The herbs are performing above standard, taking advantage of the super heat and a full 12 hour sun exposure.  The Sweet, Thai and Globe basils have grown by leaps and bounds and the lavender is already beginning to bloom.

The assortment of heirloom tomato varieties being grown have also benefited from the high heat and daily extended sun exposure.  All the tomatoes to date are sporting lots of blossoms and most are already bearing newly formed fruit (yes, tomatoes are a fruit – members of the ‘nightshade’ family and are considered a ‘berry’).  Each plant has been outfitted with a ‘cage’ to support its weight as it grows, keeping it upright and allowing easy access to the ripening fruit.

Jerusalem artichokes have pushed through and are about 4 in. tall.  Their tubers will be ready for harvest in August – September.  The garlic, chives and onions are coming along nicely.  Some new additions were added about 1 ½ weeks ago – cucumber seeds and sunflower seeds were planted.  Both germinated in about 3 days and are now showing their first set of leaves.  The cucumbers will be ready for harvest in about 6-7 weeks and the colorful assortment of sunflower varieties will be ready for cutting in 60 -80 days.  Our in house florist, Lupita will be glad to hear that our gentleman gardener did not forget to plant a few cutting flowers.

The 12 pepper varieties planted have all survived and are blooming profusely; some already bearing immature peppers. The pepper varieties run the gamut, from mild to scorching hot.  The shapes and colors are just as numerous.

June has started off with some much needed rain, warm temps and high humidity – a recipe for quick growth spurts among the garden inhabitants.  Catch up with us next month when we report in again and reveal what’s blooming, bearing, bulging and bursting…up on the roof! 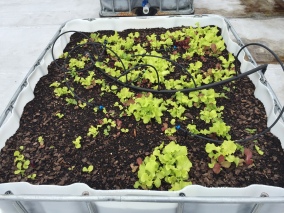 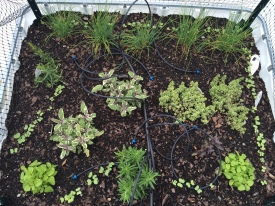 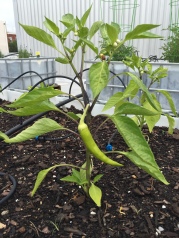 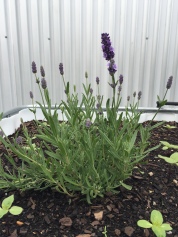 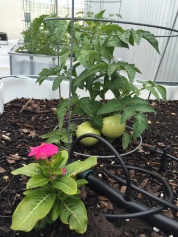